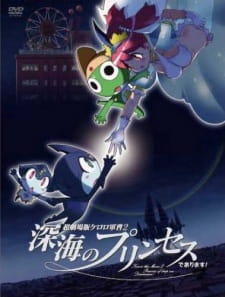 Synposis: Plot Summary: During a vacation Natsumi is visited by two male and female aliens named Meru and Maru. After becoming the Deep Sea Princess, Natsumi gains feelings for Meru who is haunted by his traumatic past. Having grown accustomed to Natsumi's title, the Keroro Platoon expects a calm vacation; however, their vacation is cut short and turns into a fight for survival as an alien creature that Fuyuki has adopted reveals itself to be the enemy of the kingdom and now sends creatures of mass destruction to assassinate Natsumi, and any who stand in their way.